Have you heard about the 50th anniversary of The Sound of Music? Did you see the behind-the-scenes Diane Sawyer special about it this past weekend?

I did. And I watched.

Only thing, it made me very emotional. I watched with tears streaming down my face. Not exactly sad tears. More like nostalgic tears.

And I realized that movies like The Sound of Music and The Wizard of Oz bring back memories of my sister Janet. And how if she was still here, I would have been on the phone with her all week long to talk about the special. And our favorite characters. And favorite songs. And favorite moments …

You see, watching movies was Janet and my “thing.” The two of us were couch potatoes on the weekends (which, admittedly, I still am. Or, more accurately, try  to be). Growing up,  we would often curl up to watch movies on a weekend night. And even when Janet moved out to start a family of her own, we continued that tradition. Not every weekend, mind you. I did try to have a social life after all. But once a month. Or every other month.

So when big, sweeping classic movies like The Sound of Music come on, I get nostalgic. And I miss my big sister …

And now you’re probably wondering what this Weight Watchers cauliflower poppers recipe has to do with The Sound of Music and my sister Janet.

The only connection is when I was editing these pictures, Kelly & Michael was on in the background. And they were interviewing Julie Andrews about the 50th anniversary …

and I started to well up again. 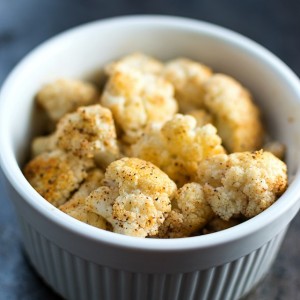 And there you have it. An easy, zero point Weight Watchers snack that will leave you wanting to climb every mountain … So sorry. I couldn’t resist!

P.S.  If you’re interested in the ramekin dish I’ve served up the Cauliflower Poppers in, you can buy a set of four 12 oz. ramekins at this link … *