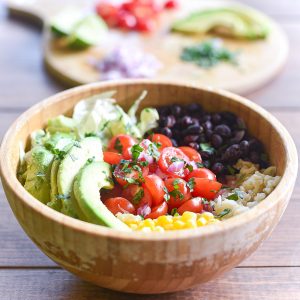 This is the salad that started it all.

My obsession with the Buddha bowl.

My obsession with eating everything out of a bowls (how did I not know how wonderful eating from a bowl could be?).

My obsession with trying to eat a plant-based diet.

This Mexican Taco(less) Buddha Bowl is where it all started …

and it’s now my go to lunch. Or dinner.

I don’t even have to stop and think about what I need to make this. Because I always have the ingredients on hand.

The most delicious and sweetest cherry tomatoes in the world. Check.

And as much as I enjoy the final product (can you say eat the rainbow), I equally enjoy the process of putting it all together.

And then carefully arrange my rainbow plant-based Buddha Bowl so everything has it’s own place.

So when I eat my lunch I can grab a little of this and a little of that and so on and so on to create that perfect blended bite that has a bit of everything on the fork. 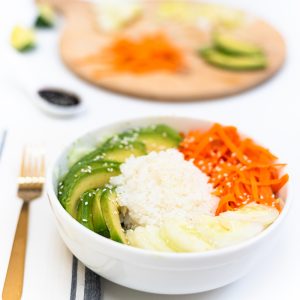 It’s been six days since I’ve eaten a vegetable.

I know, I know. Nothing to brag about.

I guess … technically … I may have consumed a pea here and a carrot there (in shrimp fried rice). And does the tomato sauce on pizza count as eating a vegetable?

But then again, isn’t tomato actually a fruit?

Speaking of fruits, not much in the way of fruit passed through through these lips over the past six days either.

Here’s the deal: The past six days was spent visiting my 86-year-old mother and my 88-year-old father in Florida. Before we left, I didn’t form or even think of an eating plan in advance. I went with a go with the flow attitude. I just didn’t realize go with the flow meant zero vegetables …

I could verify that, but I’ve been avoiding the scale lately! 😉

Let’s just say my clothes are a little snug.

So today I’m back in Chicago and back to my veggie filled Buddha Bowl lunch routine. And this vegetarian California (un)Roll Buddha Bowl salad is one of my favorites! I eat this at least once (and sometimes twice!) a week.

So, my favorite part of this Buddha bowl is the seasoning …. specifically the Marukan Seasoned Gourmet Rice Vinegar. It adds a little sweet and a little salty taste to the rice and veggies. Here’s what is looks like …

And here’s an affiliate link on Amazon (click here). Though I found mine at the supermarket. I’m pretty sure other brands offer similar rice vinegar formulations. Just check the ingredients list for sugar and salt.

And as I type that it suddenly doesn’t sound quite as healthy!

Ah well. This is coming from a girl who went six days without nary a vegetable! But I do think the seasoned rice vinegar makes the whole vegetarian California (un)Roll Buddha bowl salad so much tastier!

You can find all my recipes at this link … 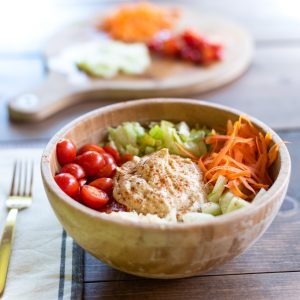 Now, this doesn’t mean I’m going to eat a Big Mac everyday. In fact, quite the opposite.

My daughter calls me a fake vegan. Which, I suppose, is true.

It comes down to me liking to eat. A lot. And, with a vegan lifestyle you can eat. A lot. Of food.

I guess technically you could call my new “diet” (which isn’t a diet in the sense of the whole counting/measuring/restricting version) is plant-based.
99% of the time. With the Buddha bowl making up a large portion of my daily food intake.

After my whole no more measuring, counting, weighing rant, I’m going to give you a recipe that not only includes measurements … but also includes Weight Watchers points.

But, technically, Weight Watchers isn’t really a diet. Right? They call it a lifestyle plan.

But mostly I’m giving the Weight Watchers points for this Mediterranean Vegetarian Quinoa & Hummus Buddha Bowl because I’ve already built up … over the years … a pretty extensive library of assorted Weight Watchers recipes. They’re some of my most visited posts, so I don’t want to disappoint. 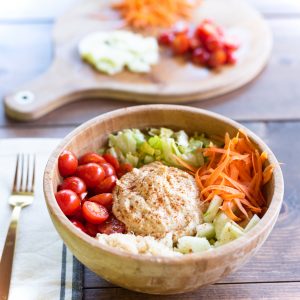 Here’s the link to the homemade hummus recipe (click here). And, if I must say so myself, it’s the most delicious and creamy hummus. Ever.