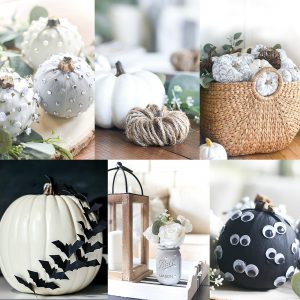 I have a little pumpkin fail story to share with you all.

It was October 1993 and I had packed up all my worldly belongings and hit the road in my white-on-white Volkswagen Cabriolet convertible to Chicago. I had no job lined up, but I did have a really fun and funny fiance with the most amazing blue eyes waiting for me. And a really cool apartment to live in.

I was eager to start our life as a couple, to make a home together, and to create and celebrate traditions together.

First up was Halloween.

We didn’t have a front porch to decorate. We lived on the second floor of a building with four apartments. Our outside entry was four concrete steps.

Oh, and the chances of our getting trick-or-treaters was practically zero.

But I was eager to decorate for Halloween and we went ahead and got a couple of pumpkins from one of the many pumpkin patches that pop up on every empty lot in Chicago in the fall. We sat on the kitchen floor and carved them up. Then rinsed and dried the pumpkin seeds, sprinkled them with salt and popped them in the oven.

When it got dark, we put our pumpkins in the front window of our apartment and lit them up with candles.

And as they flickered away, we cozied up on the couch with our toasted pumpkin seeds.

The start of a great tradition. Right?

Oh how wrong I was!

The next evening as the sun fell, I decided to light up those pumpkins again. But when I removed their little pumpkin stem lids …

And dropped the pumpkin stem lid.

Because the inside of the pumpkin was just filled to the brim with mold!

Apparently lighting a candle inside of a carved pumpkin inside of the house is not a good idea. And creates the perfect conditions to grow copious amounts of mold overnight.

If only no carve pumpkins were a “thing” back in 1993, I could have started a very different non-moldy tradition using any one of these no carve (and no mold!) pumpkin craft ideas … 🙂 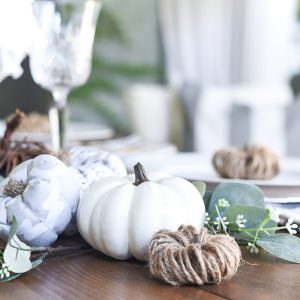 Not that I’m counting — I’m soooo 1000% counting! — but this is my sixth craft project using what I already have at home.

I’m so amazed at myself!

I seriously didn’t think I could keep this up. That after a project or two I would ultimately give in and dash off to the craft store. But no. I’m really pulling this off.

Total aside, I’m seriously saving so much in gas money too!

And when was the last time I ever used the word glorious on this blog? I’m thinking 1000% never.

I’ve been watching some YouTube videos (and when I say watching, I mean binging) of a travel Vlog from a couple who live in Wales. And they generously use the word glorious.

And I 1000% love all those words and need to incorporate them into my vocabulary. Stat.

In the meanwhile, I’ll just share how you can make your very own delightful, glorious, lush and posh jute twine pumpkins.

How To Make Jute Twine Pumpkins

Cut a length of twine that is slightly larger than 12″

Tape down both ends to ruler.

Tape a new length of twine to ruler (I didn’t cut this piece and just un-spooled as needed from the twine spool).

Wrap twine around the ruler (not too tight or it will be impossible to remove from ruler!).

Continue to wrap until you have a little over 9″

Gently remove from ruler (make sure to first untape all ends and to keep hold of the original 12+ inch length of twine taped to both ends of the ruler.

Tie a knot using the two ends of the original length of 12+ inches of twine. Pull tight.

Also tie a knot using the two loose ends of the twine used to wrap the ruler. Don’t pull too tight when knotting to keep the pumpkin “loops” a consistent size.

Use fingers to shape the pumpkin.

Find a stick in your front or back yards and cut a length for the stem.

I also made some using a yardstick. These little pumpkins measure about 3.5″ to 4″ in length.

I’m 1000% excited to dive into my craft stash to see what else I can make using what I have! 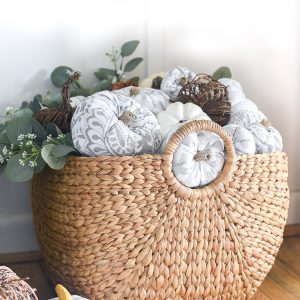 I would like to extend my deepest apologies. Especially when you see a sudden and shocking drop in sales at your Clark Street (Michaels) and Elston (JoAnn’s) stores in Chicago.

You see, I’m on a mission to craft with what I (mostly) have. Because I’ve (mostly) gathered lots and lots of craft supplies over the years. From both of you. But, sadly, too many of those supplies that have remained dormant for years and years and years (as I explained here).

So when made that lofty statement a few weeks ago about how I’m going to refrain from running to the craft stores and first see what’s in my current stash of craft stuff, I figured I was setting myself up for an epic fail.

I mean, we are entering the height of craft and decorating season. Surely I would abandon that manifesto the first time I walked into Michaels and/or JoAnn’s and caught sight of all those fun, seasonal crafting goodies!

I mean, it assaults you the minute you walk in the door!

But I’ve been putting my blinders on. Aside from a quick peek at the dollar section, I traverse Michaels like a woman on a mission …

a mission to not buy anything that is NOT on the list.

To make this patch of fabric pumpkins, I had the fabric and burlap and thread and embroidery needle and thread left over from other projects (or potential projects that never quite came to be). But …. I did need to pick up one thing.

I first toyed with deconstructing an out-of-use pillow from down in the basement to keep this project craft store shopping free. But I wasn’t sure what kind of batting (or what, for that matter) I would find inside those basement pillow.

Not too shabby a price for this fun and easy(ish) to make fabric pumpkin patch!

How To Make Fabric Pumpkins Tutorial

Start with a length of fabric (mine measures 7″ x 14″). Rule of thumb is length should be double the width. Iron out wrinkles.

Fold in half and pin right sides together.

You’re not sewing the two halves together but instead making spaced out stitches all along the top opening.

Then pull the thread to gather the fabric.

Use the needle to stitch the two sides together. I gave it multiple stitches in multiple directions. Don’t worry about it looking messy.

Turn it inside out so that the good side of the fabric is on the outside now.

Add stuffing. Pack it pretty full, but leave about 1/4 of fabric on top edge.

Like with the bottom, use the embroidery needle and thread to make large stitches and gather the fabric as you go along.

Use the embroidery needle and thread to stitch the top closed.

I actually used pliers to pull the needle out of the bottom of the pumpkin.

Now you’ll take the string on the outside of the pumpkin and thread it through the top to the bottom again. Pull tight.

Repeat this process seven more times (giving you 8 pumpkin “slices” separated by thread). I first made two halves of the pumpkin. Then made even quarters. And finished with eighths.

Add hot glue to the end and press (be careful not to burn your fingers like I did!).

I also did some trimming of errant threads and to make sure the length worked for the pumpkin.

Fix the stem in place with hot glue.

I know sewing tutorials can be tough in picture form, but you can find a fabulous video tutorial at this link — though I skipped the whole cutting the fabric on the bias part.

Now I’m going to pat myself on the back for completing two projects using my fabric and craft supply stash! 🙂 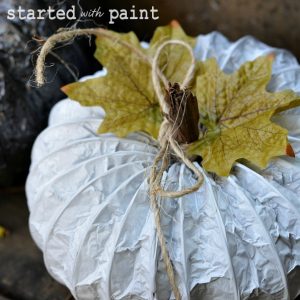 Now that the Chicago Teacher’s Union strike has been settled, may I turn your attention to a new pressing issue?

A pressing issue that affects all Chicago residents …

A pressing issue that is near and dear to my heart … and my home.

You see, I’ve recently discovered the many joys of spray paint.  The ease of use.  The no brush marks.  The durable finish.  The super simple clean-up.  I’m sold.

And therein lies the pressing issue that needs to be fixed.  Pronto.  That whole you can’t buy spray paint within the city of Chicago limits …

I mean, seriously.  Look at me.  I’m a 49-year-old woman.  I certainly won’t be tagging any garages.  And I’m certainly not some mule who’ll buy spray paint for those garage-tagging gang bangers …

But as it stands, to indulge in my newest spray paint passion I have to travel to the suburbs.  And I’m suburb-challenged.  I get lost.  I waste gas.  I get frustrated and give up …

Lucky for me Krylon came to the rescue for my latest spray painted pumpkins project.  I didn’t have to risk getting lost in the suburbs because the nice folks at Krylon sent a box filled with spray paint right to my front door …

So that I could create a fall-themed project …

A project that features some dryer vent pumpkins. Made with two sizes of dryer vents.  The 3” and the 4” diameter vents that were cut with scissors and wire cutters …

… and formed into a circle and secured with hot glue.

And then the fun began.  In the form of Krylon Rust Protector in gloss black and flat white … The Rust Protector was a must … Well, they’re going to be part of a much larger outdoor-spray-painted fall-themed-display …. … an outdoor-spray-painted fall-themed-display that I’ll be unveiling at a special Fall in Love … with Spray Paint link party on Friday, October 12 … It’s a link party I’m co-hosting with three fabulous bloggers:  Kari from Thistlewood Farm, Laura from Top This Top That, and Laura from Finding Home … … and a link party sponsored by the fabulous folks at Krylon.

Oh, and it’s a contest too.  A contest voted on by you, my blog readers.  Four winners from the link ups will be chosen by you …

Oh, and Mayor Emmanuel?  Feel free to create your very own fall-themed spray paint masterpiece and link it up here too.  Only thing, you’ll need to travel to the suburbs to get your spray paint.  Hope you don’t get lost …

P.P.S.  While this post is sponsored Krylon … any opinions I expressed about Krylon and Krylon’s Rust Protector spray paint (which, by the way, worked fabulously great in eight) are my very own … Bats Flying Across the Door